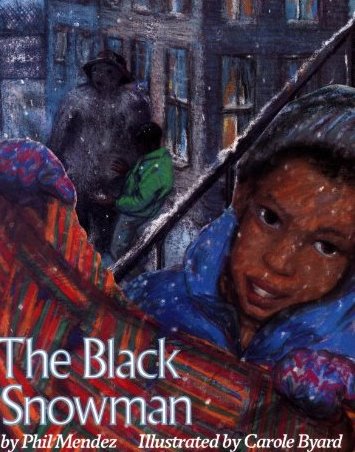 Everything black is bad." Or so thinks Jacob Miller, a poor, unhappy boy who lives in a tiny apartment with his mother and his little brother. For Jacob, being black is like being old and used — like the second-hand clothing his family gets from the Salvation Army, or like the Christmas-time snow that falls in his neighborhood and turns into slush as soon as it hits the streets. His little brother Peewee thinks differently, though, and he convinces Jacob to help him build a snowman, even one made out of dirty, black snow. They find an old, colorful cloth in a trashcan and drape it like a scarf on their black snowman. And the snowman comes to life.

The old cloth is actually the remnant of an African kente, worn ages ago among the grass huts of western Africa by an aged storyteller. With the magic of the kente, the spirit of that storyteller lives on and the Black Snowman comes to life to tell stories to Jacob and his brother. From the piles of dark snow, the Black Snowman conjures up Timbuktu scholars and Bornu horsemen. For the first time in his life, Jacob learns of the Bini and the Ashanti, and ultimately something of himself.